Let me introduce myself. I’m a twenty-four year old female that loves to shop. I should be easy pickings for you. But I can guarantee that I will never buy your imported, mass-produced rubbish.

You post a lot of things on social media. Typically things you think your target audience will find amusing – cute animals, memes about bad eyebrows, and ‘tag someone who…’ calls-to-action. You try to be funny, your followers give you some likes, and usually it is just a bit of harmless fun. That is, until you decide to post a meme that not only condones physical assault resulting in hospitalisation, but also specifically targets a group of people who participate in a sport which consistently sees car-related fatalities increase year on year.

Do you think this is funny? Because I can tell you who doesn’t find it funny: the families and friends of cyclists who have died or been seriously injured due to a driver deciding to ‘tour de hospital’ them. Putting aside the obvious reasons for why this post – as well as your support of it – is so repugnant, I’m going to explain to you why this is the biggest pile of bullshit you’ve ever distributed (the quality of your clothing aside).

Cycling is a world class sport – the fact you know what the Tour de France is proves this. And Australia has produced some incredible cyclists. The likes of Robbie McEwen, Cadel Evans and Michael Matthews, all category winners at the Tour de France and in a perversely ironic way, all part of the cyclists you jeer at as attempting to ‘remake the Tour de France’. And in a good dose of girl power, our female cycling teams are ranked third in the world – way to support your target market, Popcherry. Further to this, cycling generates a huge deal of revenue for the Australian economy. Take for example the Tour Down Under, currently underway in Adelaide, which raised $50m in revenue for the state of South Australia in 2015. To put that into perspective, the Formula One Grand Prix in Melbourne generated less than $40m, and cost the state of Victoria over $280m to host.

I only saw the meme after you’d taken it down. I decided to voice my displease regardless. And do you know how you responded? 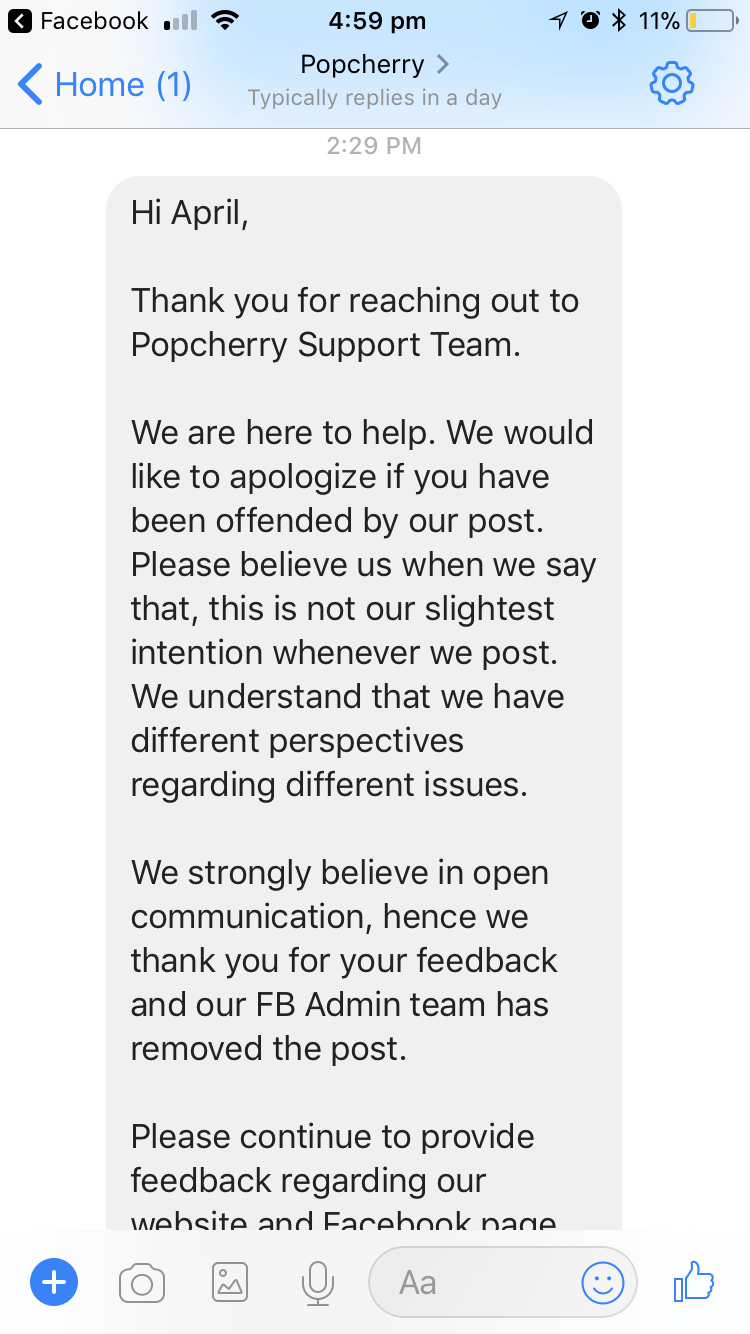 Explain me this Popcherry: does the sentence ‘We understand that we have different perspectives regarding different issues’ mean that you do in fact support the idea of running down cyclists? Because taking down the meme or not, if that is your true position, I really feel it needs to be shared. Or was it that you simply didn’t care enough about the significance of your actions that you decided to copy and paste a generic reply and leave it at that? Callous enough to post the meme, callous enough to not give a shit.

I could continue about the health benefits of cycling, explain how road registration doesn’t actually pay for use of the roads, or question the corporate conscience of a company which publically advocates manslaughter, but I think I’ve made my point. I already knew you were morally reprehensible by your sweatshop clothing, but now I know you are socially abhorrent also. I hope one day you change your business practices, revisit your views on society, and adjust your morals to look beyond a helmet and lycra, and recognise that the object you’re threatening to hospitalise is actually just another human being.

I won’t hold my breath.

Not So Kind Regards

Update 18 Jan: Popcherry have privately contacted me however will not provide a public apology to all cyclists. Please contact Popcherry and share this letter so they know how strong we are as a cycling community!