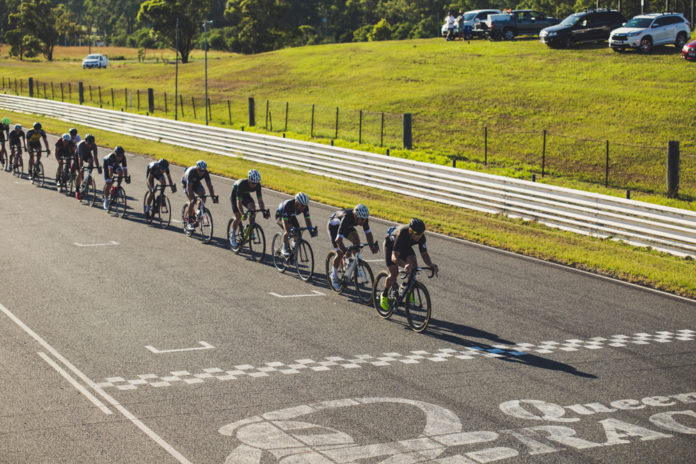 The thought of doing your first criterium can be an extremely daunting one – joining a bunch of other mere lycra-clad humans perched aboard fragile bicycles, exposed and vulnerable, to race around a track in a tight bunch does seem to defy a normal person’s sensibilities.

Sooner or later however, if you are an avid cyclist, the temptation and curiosity does get the better of you and you’ll find yourself lined up at the start line of your local track – probably. Crits are some serious fun and as long as you are sensible and play to your skill level, don’t have to be dangerous.

When I lined up at the start line for my first time, these are the very basic things I wish someone had told me. I hope they help your nerves or if you have not yet made up your mind, help you take the plunge!

Bunch ride proficiency is so beneficial

Building up your confidence and skill riding in group rides before you attempt a crit will be your best asset. Your first race will be very similar to a “fast” group ride – you will be riding at a fast pace in close quarters with other cyclists. The same rules that apply in a bunch ride apply on the crit track – you are responsible for your own front wheel, don’t take your hands off your handlebars, and hold your line.

You won’t be the only newbie

You will not be the only person on that start line for the first time. Whether it be somebody that took a prolonged break from racing and is getting back into it, or another you that has simply decided to give this whole “clubbie” thing a crack, you can be guaranteed that there will be a handful of you all just as new and nervous as each other.

Rules will be explained to you

Many clubs, at least the good ones, will have sessions for any newbies entering the world of crit racing. It may be a pre-race warm up ride where a few of the veterans pass on pearls of wisdom or they may have structured programs in which they walk you through basic skills and what to expect at your first club crit.

My cycling club, Brisbane Cycling Club, does both – our coaches regularly have multi-week programs around crit skills that I always find extremely useful. And before every crit, they have a warm up ride that they do where the racing old-hats are always more than happy to share a tip or two.

Your race will probably be mixed

In Brisbane at least, there are very few female-only club crit races. This will mean that chances are your first crit will be a mix of men and women. This can be daunting – I was intimidated by the larger men in my first race at first until I realised they are actually just big ol’ bears.

It’s your first race – nobody is out to win a million dollars so it won’t be an aggressive race. Or, if you would rather a female-only race, Lifecycle Cycling Club hold female-only club races on the first weekend of every month at the Jim Soorley Crit Track at Nundah.

You will not be breaking speed records

As a first time racer, you will be given a race grade of either D or E dependent upon which club’s gradings are being used. These are the two lowest grades and your average speed will generally be around the 35kph – 38kph. This might seem fast, until you’re in the group and find yourself in that sweet, sweet draft zone.

Crit entry is Cash Only

Eftpos has not yet reached the world of club crit racing and a crisp $10 note is required to enter the race. At Muzz, you’re fortunate enough to have a servo across the road that will let you withdraw cash at the register without buying anything. At Nundah, you aren’t so lucky – the crit track is a few blocks from the nearest store.

Let me know if you feel I have missed anything out – and tell me about your first crit experience! Mine was ridiculously dramatic – I was so nervous I nearly vomited up the banana I had eaten.